Home » Business » Why Can’t Today’s Bosses All Be as Strong as Steve Jobs?

Steve Ballmer has taught Microsoft to be gentle with partners. (Image via Wikipedia)

Why Can’t Today’s Bosses All Be as Strong as Steve Jobs?

People often lament the fact that their boss—or even their president—isn’t as strong as Apple’s Steve Jobs. But actually, the most talented executives Trish has studied, met and taught are “weak.” They’re pliant, collaborative, humble, nice, deferential—and far more effective at their jobs.

Why Can’t Today’s Bosses All Be as Strong as Steve Jobs? 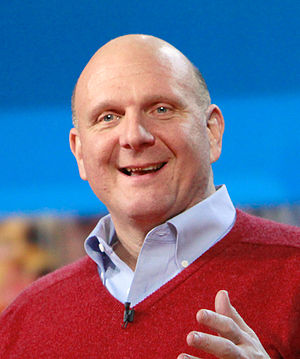 Steve Ballmer has taught Microsoft to be gentle with partners. (Image via Wikipedia)

When Steve Jobs died last October, most commentators portrayed him as a demanding, forceful, single-minded micromanager who knew what he wanted and got it. Then when Jobs’ widow, Laurene, appeared in the gallery at the State of the Union Address last month, it was hard not to be reminded of how weak Barack Obama and Mitt Romney, his most likely challenger for the White House, seem by comparison. Even their allies complain that these men are too pliant, too prone to pandering.

Why, ask the managers I meet in my travels, can’t we have more bosses like visionary, dictatorial Steve Jobs? A strong boss like that could straighten out General Motors, they say. Or the postal system. Or the White House.

Wrong question. A truly single-minded titan can’t be effective at the helm of a big organization. The most talented executives I’ve studied, met and taught resemble Romney or Obama more than they do Jobs. “Weak” bosses—pliant, collaborative, humble, nice, deferential—are taking over the world. Why? They get more done.

It turns out that no boss, whether weak or strong, collaborative or not, really has the absolute power we expect him or her to have over the organization and its destiny. Especially for large and complex outfits—such as ExxonMobil, General Motors or the U.S. government itself—there simply is no such thing as an all-powerful “strong” leader who muscles his or her way to success over a long career.

If success is your goal, you’ll fare far better if you hire fabulous lieutenants, listen to them and offer your best advice, then empower them to make meaningful decisions for the good of their divisions and their teams.

The chief executive title has conveyed less heft in recent years, due in part to the democratization of big business. Since 2003, companies listed on the NYSE and NASDAQ have been barred from stacking their boards with insiders. Institutional shareholders have been more inclined to activism. Middle managers are more likely to hold an MBA and to expect their input on key decisions to count for something.

In most cases, middle managers also have specialized skills and are closer to the problem (where they can use their insights to attack the root causes) than is the chief executive. Add to that the increased scrutiny, frequent performance assessments, and vocal criticism that’s expected in the modern business world. Simply said, bosses don’t have the luxury of either insulating themselves or ignoring their critics these days.

Jim Skinner is one of those “weak” bosses. Don’t know him? You’re not alone. His Wikipedia entry is just four paragraphs long, even though he’s boss to 1.7 million people around the globe. (That’s 500 times as many as Facebook employs.) Skinner is chief executive of McDonald’s.

Skinner is no Ray Kroc. He hasn’t significantly expanded the McDonald’s store count or reinvented its menu. A former Navy man who didn’t graduate from college, Skinner was an operations specialist who toiled anonymously for decades in middle management. Deferential and shy, he was apparently regarded by his colleagues late in his career as a sensible, convenient lieutenant.

Then in 2004, two successive McDonald’s chiefs were tragically struck by cancer within six months of each other, and Skinner was hurriedly installed at the helm. Observers assumed—Skinner was 60 at the time—that he would be a short-term caretaker chief.

But Skinner is turning out to be exactly the fixer that McDonald’s needed. Rather than make grand plans, Skinner has been joyfully implementing small, long-overdue improvements to the way the chain serves food and cleans up its restaurants. As a former number two, he now eagerly listens to his own number-two guys. Unlike Jobs, Skinner happily shrugs off his own preferences if he thinks he’s out of step with customers. (He okayed a redesigned coffee lid that customers like even though he himself so dislikes the lid that he keeps a personal stash of the old-fashioned ones on hand, reports Fortune’s Beth Kowitt.)

Under Skinner’s watch, the chain has boosted the number of people worldwide who come by on an average day from 46 million to 60 million, and lifted average per-store sales to $2.4 million from $1.6 million. That has won Skinner fans among longtime McDonald’s observers. The company’s stock has returned 250% since Skinner arrived.

Here’s somebody else who has achieved a lot by knowing when to give in to people who disagree with her: Irene Rosenfeld. She’s head of Kraft Foods, and arguably one of the most powerful women in the world.

Two years ago, Rosenfeld merged the highly profitable Kraft with the less profitable British snack giant Cadbury at an enormous cost: $19 billion. Rosenfeld argued that the price was justified because Cadbury brought Kraft much-needed growth. “Dumb,” complained Warren Buffett, one of Kraft’s biggest shareholders. Other analysts and shareholders sided with the Nebraskan.

So Rosenfeld listened, reconsidered and reversed direction. She announced this year that she would bust the merged company into two. Next winter, shareholders will once again have the option of owning a slow-growth, high-margin U.S. grocery business or a less profitable but faster-growing snacks concern. Rosenfeld is cleverly moving some of Kraft’s fabled snack brands (e.g., Oreo) into the more adventurous company, which she’ll run. (The more staid grocery business will be headed by a lieutenant.) Rosenfeld’s former critics are thrilled, and Kraft stock is near an all-time high.

At Microsoft, Steve Ballmer has succeeded by teaching the mighty software maker to stop stomping on smaller software developers—which is essential, since indie developers of apps for Microsoft’s new mobile-phone operating system will hold the keys to that platform’s sustained success. At Abbott Labs, Miles White is giving in to critics who’ve complained for years that his efforts to push the company into cutting-edge drug research were too expensive and risky. He’s jettisoning a drug-research division that he spent billions to acquire over the past decade.

Meanwhile, the CEOs who famously insist on a more dictatorial style are getting nothing done. Sears Holdings’s Eddie Lampert was once praised as the next Warren Buffett. Lampert thrilled his admirers when he pooh-poohed advice from legions of retail-industry pros inside and outside Sears who insisted that the company’s stores needed a serious injection of capital for fixing up their sales floors. “We do not subscribe to the view (seemingly widely held),” he wrote to his shareholders in 2005, “that there is a certain amount that must be spent on cap ex every year.”

Instead, Lampert used billions of dollars of the company’s precious cash to purchase Sears shares. The share-buybacks have been a waste—Sears stock is down 60% or so since Lampert took over, and analysts can only justify this as a real estate play.

What about the belligerent, preening Donald Trump? I find him genuinely entertaining, but if you set aside the properties that other developers attached Trump’s name to, it’s startling how little ground the man has broken since 1995. I count a few golf courses, a tall building in Chicago and an aesthetically unappealing collection of low-slung condo projects on Manhattan’s west side. Next to builders (and fellow Forbes 400 members) like Steven Roth or Mortimer Zuckerman, both of whom are respectfully deferential to their lieutenants, Trump is a footnote.

I don’t mean to say that every blowhard will hit the brick wall, or that conciliators will never create unreasonable strategies. But nobody has absolute power unless he or she is in a single-player game. If you want to force people to do things they don’t believe in, I hope you’re ready to pay what my former colleagues at McKinsey used to call the “asshole tax.” That’s the premium that some really arrogant CEOs or team leaders had to shell out to get people to put up with their nonsense.

How do things get done at your place? Mandates and direct orders from HQ? Kabuki theater meetings where the highest-ranking official makes the call? Or is your organization thriving under the guidance of leaders who listen, learn and look to others for good ideas and support?

Send me your favorite examples of “weak” bosses who are getting a lot done without much credit, as well as “strong” bosses who aren’t moving the needle much. I’ll post short profiles with your insights here at Forbes.com.

By the way, as for the mighty Steve Jobs, he was neither the absolute dictator nor the infallible genius that many remember him being. First of all, he failed frequently (with the Apple III, the Lisa computer, NeXT, Apple TV, MobileMe, the collapse of its U.S. manufacturing base and poor working conditions for Apple contract workers in Asia). And though he was certainly the public face of Apple, he relied heavily on dozens upon dozens of colleagues, from Steve Wozniak to designer Jonathan Ive to current CEO Tim Cook.